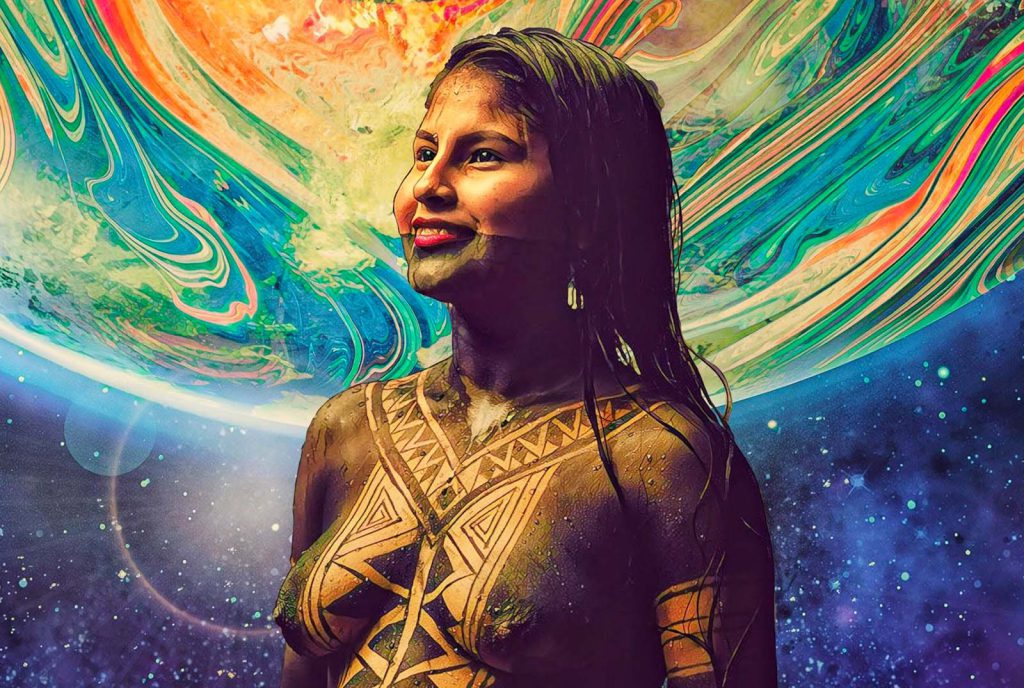 Mother Earth is sick, so are our people. This are times of pandemic and climate emergency, ecocide and genocide. Today, we live the consequences of an economic, social and spiritual model that has infected our territories and bodies. A virus that puts money above life. -Cura da Terra (2020)

Cura da Terra -cure of the earth- is the way our sisters of Amazônia, Cerrado, Pantanal, Pampa, Caatinga and Mata Atlântica in Brazil called themselves during the historic encounter of Xingu back in January 2020. We have listened to their heed in times of pandemic and destructive fires caused by greed, we as indigenous women respond to their calling for global solidarity.

As the Intergovernmental Panel on Climate Change (IPCC) warned, we have outreached the limits of our planet, we are already living in extreme droughts, forest fires, floods, wars over water, massive climate driven migrations and food shortages for hundreds millions of people. The existing system of structural inequalities have exterminated 60% of animal species in the last 40 years, has allowed the accumulation of wealth and power in a few hands while half of humanity lives in poverty, and has precipitated a deep spiritual, social, political and economical crisis. The recent pandemic has revealed the contradictions of this world, it is the first time that inequality rose in virtually every country on earth at the same time, while the increase of wealth of 10 rich people would be enough to prevent anyone from falling into poverty because of the virus and pay for universal vaccination. This is not the world we want for future generations.

We need urgent and sustainable change. The decade of 2020-2030 will be determinant, we can still stay below the 1.5ºC that could precipitate climate collapse, we can dismantle structural inequality.

We indigenous peoples are 6.2% of the global population but in our territories is preserved almost 80% of the planet’s remaining biodiversity. This shows that in the heart of our peoples exist an array of diverse ways of knowing and being that beats resilience: for more than 500 years our communities around the world have dealt with oppressions that threaten spirits, bodies, territories and cultures. Simultaneously, local and global movements of organized women, emerges as an intersectional movement that questions the deep logic of patriarchy, capitalism, colonialism, and racism. In the intersection of indigenous movements and organized women already exist viable alternatives to tackle climate emergency and systemic inequality.

How do we heal our territories, bodies and spirits? With these questions as our guide this project focuses on co-creating replicable and scalable narratives, tools and practices from inside the women’s indigenous movement. An amplifier of Cura da Terra voices in defense of cultural and ecological diversity and the foundation of a global repository of epistemic alternatives for the ongoing systems collapse.

In January 2020 we started a process of accompaniment to the indigenous movement in defense of Amazônia in Brazil, this same year Covid-19 pandemic flipped everything and pushed our work towards creative narrative intervention which derived in Cura da Terra.

“In the midst of this extermination, we, Indigenous women, make melody of the struggle, while we recover land stolen from us, we insist on celebrating our existence. We sow hope, because we, ourselves, are the very Earth healing itself.” – Celia Xakriaba